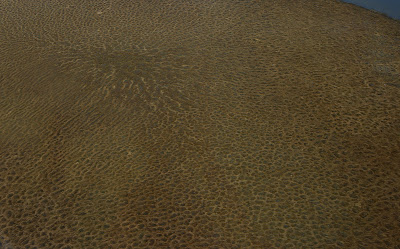 I thought it was time for another mystery photo. Have a guess what this is an image of and post your guess as a comment. The answer will be revealed soon...

I am experimenting again with HDR imaging. This a shot of the Geopolis building in Val-d'Or Quebec. I took this shot at about 0600 as the Sun was rising behind the building. This image was generated from 3 shots, taken using auto exposure bracketing. The shots were processed in Photomatix 2.5 then edited in Picassa. 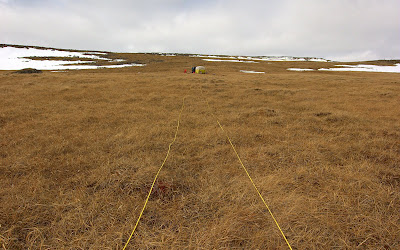 This has been my office for the past few days, I have been opperating the transmitter for a Time Domaion EM survey. This is a moving loop survey where the 200mX200m loop is moved with the receiver recording at two stations within every loop before it is moved another 50m along the line. I switch the power off before the loopers disconnect the wire to move it, then, once the loop is resdy, I adjust the voltage needed to reach the required current. I do this every 20 minutes or so all day. It is a very fun job!!!

Here is a view down two of the streets in Chukotat camp. 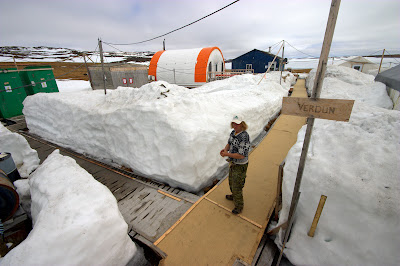 As you can see there is still a lot of snow in camp it will soon be gone as it melts fast here, I think the wind aids the rapid melting.

After a week in Val-dOr I made the trip north via LG2 and Povirnituk to Raglan. This shot was taken through the rather dirty window of a twin otter as we approached the landing strip.
I have to say every time I fly on a twin otter I am more impressed with what those little planes can do. The landing strip was really just a gravely bit of tundra that had been flattened out a bit, if it were a dirt road I would consider it rather rough. It was only about 300m long with a cliff at one end, so the approach was interesting, we flew low over the tundra and from the back of the plane the landing strip was not visible, so it was a bit of a surprise when we passed over the edge of the cliff suddenly hit the ground, dust and gravle were flying all over the place as the plane slowed down on the short air strip. Watching the plane leave was even more impressive, it actually backed just off the end of the gravel, reved it's engines and lurched forward, after bounding down about 200m of bumpy gravel it leapt into the air.